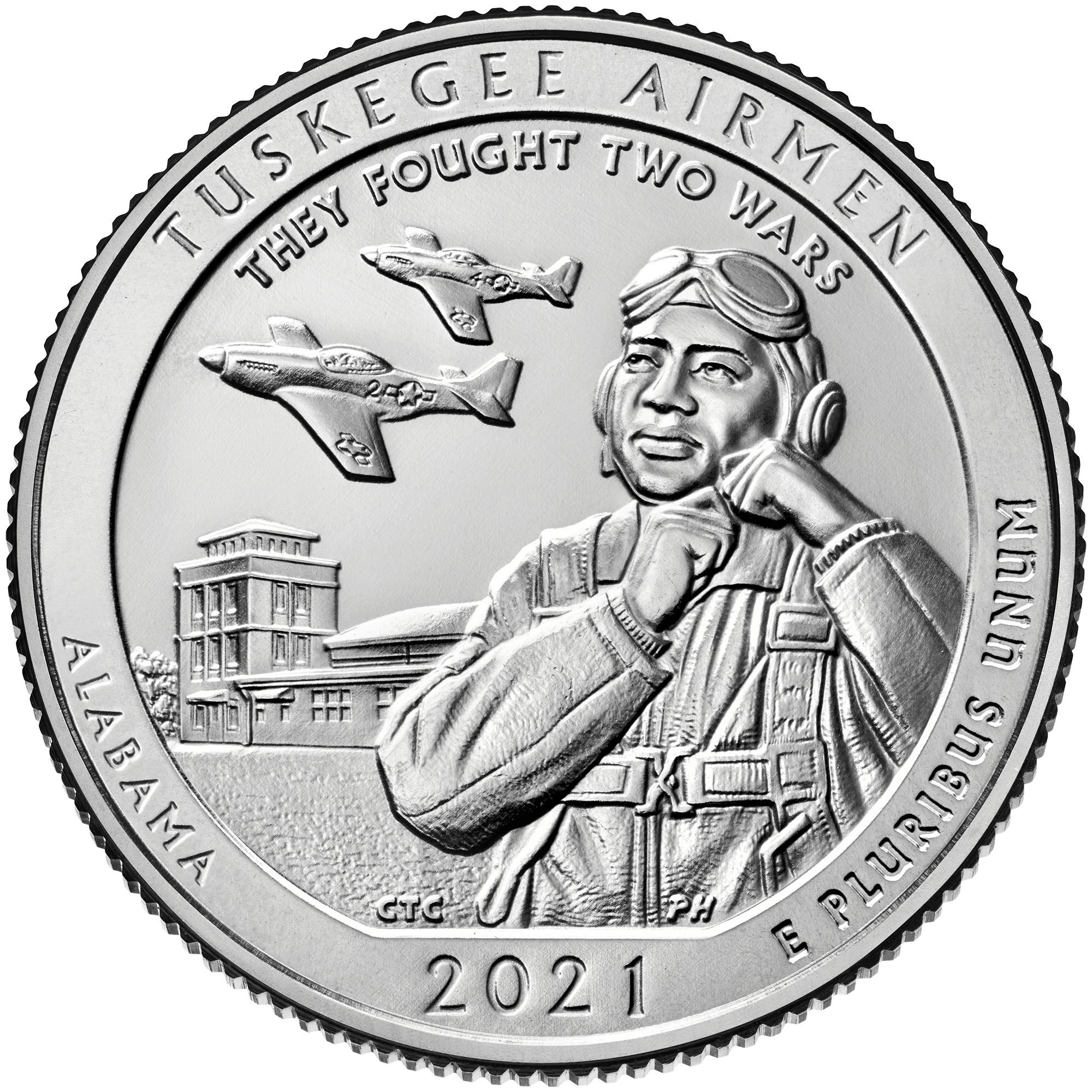 The Mint launched the America the Beautiful Quarters Program in 2010 as authorized by Public Law 110–456, the America’s Beautiful National Parks Quarter Dollar Coin Act of 2008 (Act). The Act called for the Mint to issue 56 quarter-dollar coins with reverse designs depicting national parks and other national sites in each state or territory and the District of Columbia. The coins were issued in the order in which the featured site was first established as a national park or site.

Established in 1998, the Tuskegee Airmen National Historic Site in Alabama commemorates the heroic actions and achievements of the famous Tuskegee Airmen. The term “Tuskegee Airmen” pertains to both men and women of diverse nationalities. They were composed of nearly 1,000 pilots and more than 15,000 support staff (including navigators, bombardiers, and mechanics). The site preserves five historic structures used during primary flight training during World War II.

“It is fitting that such a significant historic site will complete this successful coin program,” said Mint Director David J. Ryder. “The Mint is proud to honor the men and women who overcame segregation and prejudice to become one of the most highly respected fighter groups of World War II.”

The reverse (tails) design depicts a Tuskegee Airman pilot suiting up to join the fight during World War II with the Moton Field control tower in the background. The pilot looks upward with pride and confidence as two P-51 Mustangs pass overhead. The inscription “THEY FOUGHT TWO WARS” is arced across the top as a reference to the dual battles the Tuskegee Airmen fought–fascism abroad and racial discrimination at home. The design was created by United States Mint Artistic Infusion Program Designer Chris Costello and sculpted by United States Mint Medallic Artist Phebe Hemphill.

The coin’s obverse (heads) depicts the 1932 portrait of George Washington by John Flanagan, which has been restored to bring out subtle details and the beauty of the original model. Inscriptions are “UNITED STATES OF AMERICA,” “LIBERTY,” “IN GOD WE TRUST,” and “QUARTER DOLLAR.”

About the United States Mint
Congress created the United States Mint in 1792, and the Mint became part of the Department of the Treasury in 1873. As the Nation’s sole manufacturer of legal tender coinage, the Mint is responsible for producing circulating coinage for the Nation to conduct its trade and commerce. The Mint also produces numismatic products, including proof, uncirculated, and commemorative coins; Congressional Gold Medals; silver and bronze medals; and silver and gold bullion coins. Its numismatic programs are self-sustaining and operate at no cost to taxpayers.